The ugly underbelly of private renting

When my mum first came to Britain from Jamaica in the 60s, overt racism was just a normal part of her day-to-day experience.

She never tires of telling me about the famous ‘no blacks, no Irish, no dogs’ signs that landlords put up on properties. 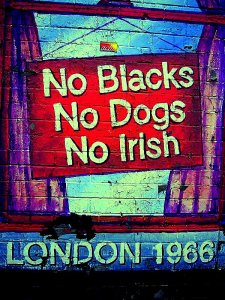 In those pre-equality regulation days, bigotry didn’t need to hide behind plastic smiles, it was allowed to roam free and unashamed.

The  Race Relations Act 1976 was supposed to put an end to all that and the Equalities Act 2010 seemed to reinforce the message that discriminating against someone because of the amount of melanin in their skin was simply not acceptable.

Among other measures, the Act made it:

“unlawful for a person who has the authority to dispose of premises to discriminate against or victimise someone else …by not letting or selling the premises to them.”

An undercover investigation by the BBC’s Inside Out London programme into discrimination in London’s private lettings industry aired last night. It showed that, for some letting agents, these laws are just obstacles to be navigated….

Read the rest of this article on the Guardian, Comment is Free

Why the Boston bomber is not evil

In the immediate aftermath of the terrible events at the end of the Boston Marathon last night, like everyone else, I am filled with sadness.

Marathons are a joyful occasion and I’m looking forward to cheering on friends who are running in London next Sunday. 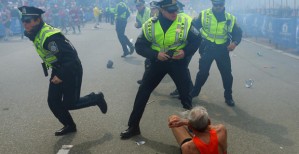 That someone would chose to do this to an event which brings 500,000 spectators out to watch over 20,000 runners, many raising money for charities, beggars belief.

Looking for news on Twitter, along with the genuine shock and good wishes to injured and families of the dead, two types of response worried me. END_OF_DOCUMENT_TOKEN_TO_BE_REPLACED

The French Government has introduced plans to ban women from wearing Muslim veils in public buildings and parks.

The new laws could be in place by the summer and are causing a stir in Muslim communities world wide even though many Muslim women don’t wear veils.

Only around 2,000 French women wear veils in public out of a Muslim population of 5 million, but to many the move must feel like an attack on all of Islam.

President Nicolas Sarkozy brought in the change because he sees the burqa and niqab as signs of women’s oppression rather than religious garments. 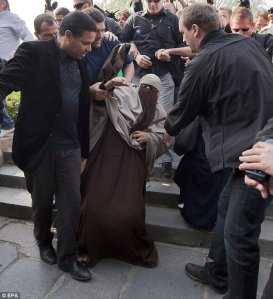 Ever since the forming of the republic in 1789, France has been keen to keep religion and state separate. END_OF_DOCUMENT_TOKEN_TO_BE_REPLACED